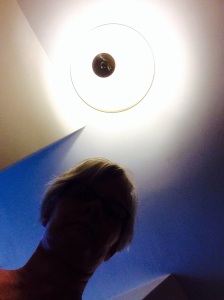 What is it about the ethnographer’s office that makes one feel as if one has entered that Turner-esque liminal space? This summer at Smith College I have had an opportunity to research just this topic.

Turned out of our office building due to its impending demolition, my boss and I began office squatting in the performing arts center’s kitchen, becoming something of an oddity. The ethnographer, being off in the field for the summer, offered the use of her office in the case that the kitchen became a less than conducive work environment. Our excursions to that other office, though in reality more of an office than ours, had something of a vacation feel to it (see Graburn for the linking of liminality and vacationing).

The location on the top floor of the music building gave the proffered office a faraway feel even though it is adjacent to our squat location. This attic-like atmosphere, hot and stuffy, contrasted to our building’s ice-cold air conditioning.  Biodiversity-wise, we might as well have been traveling from Nova Scotia to Guatemala City. Then there is that ivory tower floating-above-it-all feel which comes from the height of the building, increased by being on the edge of a hill, and the brick edifice-ness of the college itself.

These superficial features definitely set up a particular read of place, but it is the contents of the room itself that create a confusion of place/time and a sense of betwixt/between. These include objects from Southeast and East Asia and are generally objects of play–kites, puppets, mobiles. This a Jungian analyst’s office even if it isn’t occupied by one. I want to plop myself on the floor and settle in with shadow puppets and a flashlight.

Pop culture items from the U.S. and Britain, for example, the life-size Star Trek figure and a soccer shirt, shift me back to an adult scale, though with no less sense of fun. Next, there are the musical instruments from “everywhere” and musical recordings from “anytime,” as exhibited by cases of cassettes and rows of cds. The wall of books is my chrysalis, wrapping me in a coccoon of imagined places, traveling far without ever leaving the magic armchair. I will surely pupate as I read The Forest People, West African Pop Roots, The Puppet Theater of Japan, or an issue of Songlines.

If only I could stay forever,

but the attic heat eventually drives me

back down to icier climes. 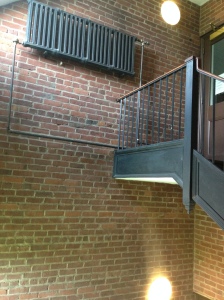