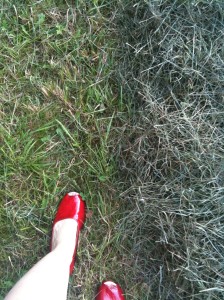 I made this is a video environment and sound score for a performance project for Tornare A Casa: Coming Back Home, Part 2 of the Red Shoes‘ series. The project is a collaboration with Bonnie Eldred and was performed by her in October, 2012, Genoa, Italy. The video was shot with my iPhone on the Rivulet Trail at the William Cullen Bryant House, Cummington, MA.

The sound score reflects my interest in the four (plus) tones of Chinese language. I noticed, as my ears became sensitized due to daily immersion, that I would hear Chinese words in naturally occurring sounds, for example, when I clinked two glasses together or put the silverware in the drawer. This sound score builds on those kinds of synergies. I am also interested in the aesthetic of jo, ha, kyu from Japanese Theater, and I experimented with that rhythm of building and dropping in the sound score as well. Due to the simplicity of the walking rhythm I was able to play a bit with these elements.