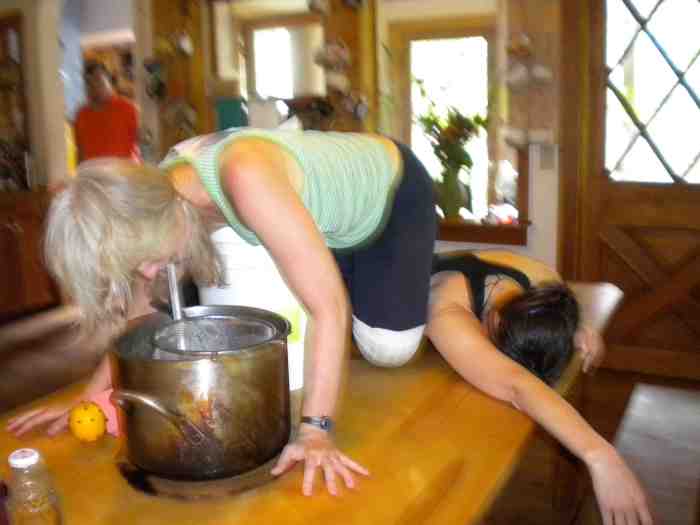 (A version of this blog was published in ITCH magazine)

I did what I am referring to as a ‘somatic action’ last summer at the SEEDS (Somatic Experiments in Earth, Dance + Science) festival around water. It was during the gushing phase of the Gulf of Mexico oil crisis. I crawled for three hours on an “information gathering” expedition focused on the crisis. There were three workshops going on, so I crawled in and out of the activities. People joined in at times. For an hour or so, I carried a log on my back, which kept slipping off. My score became that I had to reposition it without using my hands. As this went on, I realized that putting the equipment in place underwater to cap the well could be a somewhat clumsy operation. So, through the somatic action, there is some kind of “empathetic participation” is how I think of it. Perhaps one might describe it as shamanic in nature.

One of the SEEDS workshop participants had shared the author of The True Power of Water Masuru Emoto’s prayer to water: Forgive us, We’re sorry, Thank you, We love you. In Emoto’s book, he shows pictures of water that have been treated with hado or the vibrations of various words. His method seems to have some similarity to homeopathy, in which water is vibrationally imprinted with the active components of a drug (see Vibrational Medicine by Richard Gerber, M.D.). Saying Emoto’s prayer as I crawled, I repeated and repented and sang to myself, contemplating the cleansing power of water figuratively, historically, biologically, physiologically. Would the water molecules of Plainfield, Mass. hear me? Would they respond by repeating the vibration to their fellow molecules of the Gulf? As it turned out, it was the day that they successfully capped the oil well! It created connection for me to a situation that felt hopeless and overwhelming.

There is some corroboration for this feeling of connection through process: I heard in a radio interview that victims of abduction were found to have less post traumatic stress than their passive counterparts if they “did” something to escape, even if it was fruitless. For example, a little girl who tried to dig her way out of a subterranean pit, though unsuccessful, fared better psychologically than others who hadn’t. A real little girl, abducted and stuck in a hole. Like Alice in Wonderland, she met the Somatic Rabbit in the nick of time. I believe that bringing the soma into environmental and social activism—in the great tradition of nonviolent protesters like Gandhi and Martin Luther King, Jr.—would be of benefit to humankind as we face the terrible consequences of our collective thoughtlessness.

MB in Crawl for the Gulf, SEEDS 2010, by Colleen Bartley

MB during Crawl for the Gulf, 2010, by Colleen Bartley at Earthdance