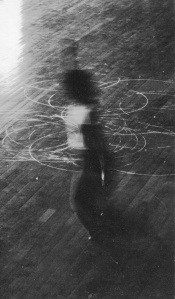 The paper dance was the first project I made at Bennington College for my MFA. I had come to Bennington to “carry on” the investigations of my mentor Nancy Topf. I was very intrigued by a dance she made that she described to us called The Body is Round in which, with chalk in hand, she rolled on the floor describing perfect circles (I documented the score for this dance in CQ chapbook 3). Recreating this dance was to be my entree to graduate studies.

ArtSpoken: In Paper Dance I set out to deepen my study of experiential anatomy and the work of my teacher Nancy Topf. Based on ideokinesis, her work uses images of the body which have directional components. The sacrum scoops, the psoas muscle supports us in our centerline, the ribs deepen in their spinal sockets. These images are tiny scores for movement. She encouraged us to see and draw the body as cycles which we would trace and retrace. In Paper Dance, I took these ideograms into the third dimension, deforming paper into sculpture and animating it through my movements. The nude body emphasizes skin and sensation, the paper is a mobile extension of the skin. The marker inscribes sensation on the surface, soon the paper wraps and folds as sensation stimulates the interior, bringing it to life.

Blog: To start our first semester off and introduce ourselves to the other grads, we were to share something of our work. Most people showed slides or video; I however am drawn to the participatory like a pig to slop. So, I came armed with markers and giant paper for everyone to roll around on. Turns out the visual artists weren’t so keen on moving in front of other people. It also turns out, according to the seminar leader at the time, that abstract expressionism is dead. “We tried that and it didn’t lead anywhere.” Oops. It also turned out that the faculty at Bennington were not particularly interested in sensory based dances for performance. Double oops. I wish they had said something during my interview. Welcome to grad school.

Stunned, I sat on my big white paper for weeks trying to make perfect circles. Finally one day I got mad and kicked and tore at my paper and a dance was born.

Joanna Rotkin’s (the “other” dance grad and my comrade) favorite story about the paper dance was once I was rehearsing in Martha Hill, the giant studio/stage space, and a college tour group came through. It happened to be a moment when I was all wrapped up in the paper and attempting to stand up. One of the tour group asked, “Do you need help?”

Pooh Kaye showed up in the nick of time and suddenly everything made sense. She helped me to position myself. Thanks to her I have lovely video footage of the paper dance in the art museum. That is Bill Macholdt’s pottery on exhibit. (He is a visual artist who didn’t mind moving.)

The Paper Dance, thanks to “Bad” Melinda Ring’s costuming suggestion, is usually done in the buff, but I have also performed it in my red long underwear for elementary school kids as a holiday piece, think gift wrapping. It’s the Nutcracker of my repertoire.

I have since discovered that many people have paper dances. Anna Halprin has a group paper dance! It’s archetypal, like the Witch dance (Wigman, Graham). I felt like a lot of my grad school experience was spent recapitulating the ontology of modern and contemporary dance. Perhaps for Nancy Topf, whose teacher Barbara Clark said, “The body proportion needs depth,” drawing circles while rolling was the traversing of a dimensional shift. Animating a flat body image was my journey; sensation gave me depth, interior. My favorite moment in the dance was when I was finally dressed in torn pieces of the paper. I felt that was the moment that the dance took off. I am still working on keeping up.